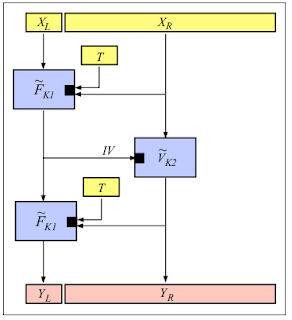 Posted by Unknown at 8:30 AM No comments:

This is the first of a two-part blog post has been collaboratively written for the ECRYPT-EU blog by Eduardo (University of Bristol), Marie-Sarah, Matthias and Ralph. Part 2 can be found here.

Earlier this month, from 4-7 January, a few ECRYPT-NET fellows and about a hundred others attended the Bar-Ilan University winter school on cryptography. It took place in Ramat Gan, a suburb of Tel Aviv, at the Kfar Maccabiah hotel and conference centre (named after the Maccabiah, or Jewish Olympics, that take place there every four years). The school was intense, but well organized. It was split into two parts, verifiable computation and special encryption, and so will be our coverage of it.

Michael Walfish, Yael Tauman Kalai, and Eran Tromer guided us through methods for verifying the outsourced computation of functions. We particularly appreciated the crystal-clear overview of all sessions, given by Michael Walfish, that emphasized how the content of the talks fit together.

Let's set the scene for verifiable computation: a client (the verifier) wants to outsource the computation of a function f to a server (the prover) who has more computing resources. But how does the verifier know that the value returned by the prover is actually the result of applying the function f to the purported inputs? A malicious or a lazy server could indeed modify the process to gain some advantages as, for instance, reducing the cost of operating a system.

Yael Kalai's talks took a more theoretical approach, guiding us through the evolution of Probabillistically Checkable Proofs (PCPs). She emphasized the importance of "good" security assumptions, where "good" requires at least, and according to her point of view, that the underlying assumptions can be efficiently falsified. These theoretical worries were well founded, as most of today's verifiable computation protocols rely on SNARKs (standing for Succint Non-interactive ARguments of Knowledge) which cannot be proved secure via black-box reductions from (efficiently) falsifiable assumptions.

Yael's talks provided also very interesting and intuitive examples. To give one, suppose that Peggy and Victor are playing chess. After a number of moves, Peggy (the prover) wants to prove to Victor (the verifier) that she has a checkmate. If Victor fails to see it, it is for Peggy easier to convince him by continuing the game (an interactive proof) until he does, rather than to explain all the possible combinations of moves without moving any piece (a non-interactive proof). This intuition of the power of interaction extends to the rest of the proof systems. Finally, she even showed us how the subject fits in the quantum framework, introducing us to the notion of non-signalling adversaries.

Eran Tromer recovered the line of Michael Walfish and focused on the details of SNARKs and how they are actually constructed. Among others, he has been writing libsnark, a C++ library that is used a lot for verifiable computation systems relying on SNARKs. He also showed us a potential application for them, called Zerocash. Zerocash is a protocol that provides a privacy-preserving version of Bitcoin. In contrast to Bitcoin, where all the transactions are public in the block chain, Zerocash does not contain information about the payment’s origin, destination or amount. The correctness of the transaction is guaranteed via a zero-knowledge proof. More details can be found here.

Tuesday afternoon, we made an excursion to the remains of Caesarea, a Roman city on the Mediterranean coast that was built by Herod over 2000 years ago. To say that it had a tumultuous history would be an understatement. Our tour included a walk through a "graveyard" of columns and capitals, the amphitheatre (whose first row is still intact), and the hippodrome.

Next, we took an informative tour of the Binyamina winery. We learned that grapes are crushed with a flexible rubber material to simulate the skin of feet. For red wine, the grapes are fermented (skin, seeds, and all) before being crushed. For white wine, seeds and skin are removed (by sedimentation) after pressing, then fermented. The tannin (bitter-tasting substances) in wine comes from the seeds, skin, and maybe the material of the barrel in which it is matured. Whether wine is aged or matured in an American oak (sweeter) or French oak (more tannins, adds more complex flavours) barrel affects the final product. Tannins prevent oxidation, so red wine (with more tannins) can be matured longer. Stopping fermentation early makes wine more sweet.

After learning how wine is made, we concluded the day by learning how it tastes (using our five senses!) and enjoying a generous dinner.

The second and last part of the post can be found in the ECRYPT-EU blog.
Posted by Eduardo Soria-Vázquez at 6:48 AM No comments:

This week saw Real World Crypto 2016 in Stanford California. The highlight was the first awarding of the Levchin prize for work in the field of practical cryptography. The prize award is donated by Max Levchin, a founder of PayPal, and two such prizes of $10,000 will be awarded annually.

The first recipients of the award are
The real purpose of the award though is to highlight work to the wider community that one can have deep and lasting impact on society by working in an area as mathematically opaque as cryptography. Awards such as this, and events such as Real World Crypto, are designed to raise the profile of applied work in this space and encourage people to apply their skills to solving the pressing security problems affecting our online world.

In the rest of the conference there was an amazing program of interesting talks (although I would say so, since I was on the panel for selecting the talks). The highlight of day one for me was the talk by Adrienne Porter Felt on usability issues related to TLS failures in Google Chrome. By collecting numerous bug reports from Chrome users the team at Google found that most errors are not due to poor server configurations (indeed most errors occur when users connect to sites such as Google or Facebook), but are due to poor client configurations. For example a significant proportion of errors are caused by device times being incorrect. So lesson: Make sure you set your clocks correctly.

One highlight of the second day was Hovav Shacham's talk on the recent discovery of a backdoor Juniper's ScreenOS. The initial backdoor was rather uninteresting in that if a certain key combination was presented a user would be given enhanced privileges. However, on discovery of this backdoor Hovav and his colleagues discovered a more interesting potential backdoor based on the Dual-EC PRNG that could compromise the VPN traffic that Juniper is used to protect. The interesting part was that previous cryptographic focus on Dual-EC has been on products which had explicitly listed Dual-EC usage as part of their FIPS certification. The Juniper product had not explicitly listed that it used Dual-EC, so the discovery of a Dual-EC based potential backdoor could imply that many more products, by many more vendors, could be using the Dual-EC PRNG.

The talks generating the most interest on the third day were the ones explaining the new Intel SGX technology. This is a technology which allows applications to run in an "encrypted enclave" on an Intel chip; where data is held encrypted in memory and is only decrypted as it enters the chip and is processed. When it returns to memory it is automatically encrypted. At its heart this idea goes back to the original paper on homomorphic encryption by Rivest et al from the mid 1970s. However, the new Intel technology has a number of additional features which make it suitable for a modern environment. The first talk by Rebekeh Leslie Hurd introduced the overall technology and some of the attestation and communication issues needed to authenticate the enclaves, and allow enclaves to talk to each other. The second talk by Shay Gueron discussed the details of how the memory is encrypted in a way which respects the cache architecture on modern microprocessors.
Posted by Nigel Smart at 7:36 PM No comments: