The second talk in the secure computation session on the third day of Eurocrypt was on the paper   "How to Hide Circuits in MPC: An Efficient Framework for Private Function Evaluation", authored by Payman Mohassel and Saeed Sadeghian from University of Calgary. Saeed gave the talk. This post also covers the more elaborate talk given by Payman after Eurocrypt at University of Bristol.

The paper revisited the problem of Private function evaluation (PFE), a relatively less explored problem compared to the well-known problem of secure function evaluation (SFE)/multi-party computation (MPC).  In a PFE protocol among n parties, say P1,....,Pn, the goal is to compute a function f represented by a circuit C, held privately by the first party P1 on the private inputs of the n parties. Unlike secure function evaluation (SFE), the circuit is not public, rather it is the private input of the first party. In particular, nothing else other than the size (number of gates) is leaked about the circuit. PFE is particularly useful in scenarios where learning the function compromises privacy, reveals security vulnerabilities, or when service providers need to hide the function or specific implementation of it to protect their Intellectual Property. Another important motivation is that PFE yields efficient program obfuscation (if interaction is allowed).  The paper investigates PFE in the most basic setting of semi-honest adversaries and report the most efficient constructions to date.  The main contribution is a general framework that can be instantiated to either two party or multi party PFE considering either Boolean or  arithmetic circuits.

History. A bit of history of PFE is given below. The problem of PFE can be solved by reducing it to SFE of a universal circuit Ug that takes as input the  circuit C (containing g gates and representing function f) and the parties' private inputs x1,....,xn and outputs f(x1,....,xn).  The main objective is then to design smaller size universal circuits. Two approaches are known so far for boolean circuits. Valiant showed a construction of a Boolean universal circuit achieving (asymptotically) optimal circuit size of 19glog(g) for any given Boolean circuit of size g. An alternative construction is due to Kolesnikov and Schneider. They obtain a worse bound of 1.5 g log2 g. Nonetheless, the construction of Kolesnikov and Schneider seems to yield smaller universal circuits than Valiant's construction for circuit size less than 5000. Unfortunately,  the universal circuit approach does not lead to satisfactory solutions for arithmetic circuits due to the fact that the universal circuits are too large for any practical purpose (state of the art: size of  Ug becomes as high as O(g5)). Noting the bounds on the size of universal circuits and current state of the art SFE constructions (e.g. Yao for two party and GMW for multi party), it can be concluded that PFE constructions based on the Universal circuit approach do not achieve complexity that is linear in the circuit size g.  The second, and perhaps asymptotically optimal approach of designing PFE is via FHE (where even the circuit size could be kept private). Due to the high computational overhead, this solution can not be considered practical given the current state of the art of FHE. In a novel attempt, Katz and Malka designed two party PFE based on singly homomorphic encryption that attains linear complexity. Specifically, their constructions require number of public key operations that is linear in the number of gates in the circuit. The construction of Katz and Malka does not extend to the multi-party settings for n>2. In light of the above history, it can be concluded that the existing solutions are more expensive compared to their SFE counterparts (the current state of the art SFE constructions require linear number of symmetric key operations) and no multi party construction or arithmetic circuit based PFE with linear complexity (even asymptotically) is known thus far. This leads to the interesting question:

Can we design PFE with linear complexity in all standard settings (without resorting to FHE based trivial constructions), namely for any settings that is a cross product of (two party, multi party) and (Boolean circuit, arithmetic circuit)?

Contribution of the paper. This paper  answers the above question in affirmative when semi-honest security is concerned with and improves the state of the art of PFE notably by presenting a general framework that can be instantiated in any of the above mentioned settings. To fully hide a circuit C in PFE one needs to hide (i) the circuit topology and (ii) the function of the gates in the circuit (AND, OR, XOR etc.). The framework addresses the above two important issues independently. They introduce two functionalities:  circuit topology hiding (CTH) functionality and  private gate evaluation (PGE) functionality. Then they show how these two functionalities can be composed to realize PFE. And lastly, the paper presents a number of ways to realize the functionalities.  In what follows, I present intuitive treatment of these functionalities and try to describe how they are composed in a PFE. I also briefly mention how the functionalities are realized in the paper:

PGE functionality. The problem of PGE is as follows: let G be a gate that is to be evaluated. It's type is known only to P1. The parties wish to evaluate G on inputs a and b that are secret shared among the parties (according to some secret sharing scheme) so that the output remains shared and the type of G remains hidden from everyone except P1. The ideal functionality PGE is described as follows: it takes the gate G from P1, the shares of a and b from all the parties, computes G(a,b), finds secret sharing of G(a,b) and finally passes the ith share to the ith party.
Note that PGE can be seen as a PFE protocol where the circuit to be evaluated is a single gate. Very efficient solutions for implementing PGE is shown in the paper based on 4-out-of-1 OT  and singly homomorphic encryptions.

CTH functionality. A bit of background is needed first. To hide the circuit topology, the first task is to conceive it as a mathematical object. The authors note that a circuit topology can be described by a mapping. Let us describe the mapping. First find a topological ordering of the circuit C consisting of g gates. Label the input wires to the jth gate as iw2j-1 and iw2j (assume for simplicity that the circuit consists of only two input gates).  The set of incoming wires, say IW are the set of input wires to all the gates in the circuit. IW contains 2g elements. Next define another set OW, the set of outgoing wires. OW is defined as the union of the set of circuit input wires and the output wires for each non-output gate in the circuit. OW contains n + g - o wires where n defines the number of input wires and o defines the number of the output wires in the circuit. The outgoing wires are labeled as follows: The n input wires are labeled as ow1,....,own. Next output wire of the jth non-output gate (i.e. the output of this gate is not a part of the circuit output) is labeled as own+j. Now the topology of a circuit C can be fully described using the following mapping ΠC: {1,...,|OW|}--> {1,...,|IW|} from OW to IW. The mapping ΠC maps i to j if the ith outgoing wire owi is connected to jth incoming wire iwj. To be more clear, have a look at the following example circuit and its corresponding mapping shown using arrows.

The goal of CTH functionality is to enable oblivious evaluation of the mapping in an on-demand fashion as and when a gate is computed using PGE and the gate output wire needs to be mapped to the gate input wires it is connected to, to continue further computation. To understand what CTH functionality is expected to do for us, let me detail below how PGE and CTH functionalities are composed  to build PFE. The PFE protocol starts with an initialization phase. In this phase P1, knowing the circuit C, sorts the gates topologically and computes ΠC. Next every party shares its input (according to some secret sharing scheme) among all. The shared inputs are labeled as the first n wires in the set OW. From now on, the idea is to map an outgoing wire to incoming wire(s) (according to ΠC) as soon as it is ready (meaning the value associated with the wire is available in the shared format among the parties). Once all the parties share their inputs in the initialization phase, the parties perform the mapping via CTH functionality obliviously so that ΠC is not leaked to anyone other than P1. The CTH functionality enables this via two types of queries (which the parties are allowed to issue to CTH). By issuing a mapping query OMAP([x],j), the parties wish to map the jth outgoing wire where [x] is the associated sharing for the outgoing wire ([] is used to denote sharing). On receiving such a query, CTH takes ΠC from P1 and the shares of x from the parties. It computes ΠC(j) and for each l where j is mapped to lth incoming wire, CTH internally associate and store a re-randomised sharing of x. Note that neither the indices to which j is mapped to and nor the rerandomized sharings are revealed to the parties at this stage (information on circuit topology leaks otherwise). Rather the re-randomized sharings corresponding to the mapped input wires will be distributed on-demand; meaning as and when the parties want to evaluate a gate with those mapped input wires. So once OMAP([*],j) is queried for all j corresponding to n input wires, the parties proceed to evaluate the first gate. The sharings corresponding to the input wires of the first gate are stored in the CTH functionality and is not yet available to the parties. The parties issue REVEAL query (the second allowed query) to CTH to get the sharings. A reveal query REVEAL(j) implies the parties wish to know the sharing associated with jth incoming wire. CTH distributes the stored re-randomized sharing corresponding to jth incoming wire; so Pi receives the ith share from CTH. In general for evaluating jth gate, the parties send REVEAL(2j-1) and REVEAL(2j) and on receiving the corresponding shares they invoke PGE functionality to compute the sharing of the gate output.

To get a more clear picture, see the figure below that explains how party Pi interacts with CTH and PGE functionalities to evaluate jth gate. The numbers in the blue colored square boxes indicate the orders in which Pi proceeds. First Pi issues REVEAL(2j-1) and REVEAL(2j) to CTH and in return receives re-redomized shares of values a and b that are associated with (2j-1) and 2j th incoming wires. Then it invokes PGE and once it receives the share of the output of the jth gate, it makes an OMAP query to CTH to map the outgoing wire of jth gate. 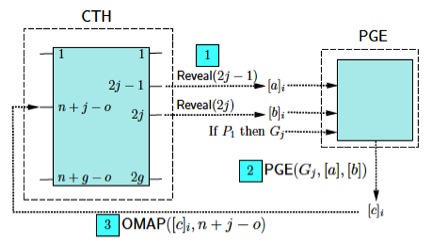 Open problems. Loads of open questions are posed at the end. One interesting direction is to investigate PFE with other security notions. This paper considers semi-honest setting.  Designing PFE with malicious and covert security  is a good open question in itself. It can be further investigated if the above notions of security can be achieved while maintaining linear complexity. PFE in information theoretic settings with linear complexity is another open question.  It is also important to find PFE that hides even the number of the gates in the circuit (known solution is via using FHE).