IoT stands for "Internet of Things": thousands of interconnected devices sharing (sensitive) information and personal data. As many of them are small and embedded (not all: during a summary talk, Florian Böhl pointed out the existence of connected Caterpillars, for instance...these, not these), this directly translates to the need for a careful evaluation of threats due to side-channel attacks.

Benedikt Gierlichs gave a talk about such a crucial aspect of IoT deployment. He introduced the subject by means of possible applications and use-cases (many of which were the main focus of other talks) and by explaining common issues when securing IoT nodes. In particular, he gave a nice "equation" that succinctly describes them.

Although being a quite simplistic representation of nodes, the equation suggests a very interesting peculiarity of IoT devices within the security framework: the possible points of failure are more in number and also more dangerous than usual non-connected devices. As Ingrid Verbauwhede also remarked during the discussion phase, many of those devices are secure by themselves; it's the fact of being part of a network that raises security issues. Indeed network security adds a non-trivial challenge to the already tough work of securing an embedded device. Since such a discussion is prohibitively broad for a workshop talk (in fact spanned the whole workshop), Benedikt outlined three essential components in IoT security. The nodes need:


Taken the first two points for granted, the remaining of the talk focused on the third one by providing introductory notions on side-channels analysis, in particular an overview on possible attacks (active/passive, invasive/non-invasive). The speaker remarked the number of things that can possibly go wrong even in the situation in which good crypto and secure interfaces are deployed. If such an assumption is dropped, the scenario is even scarier. In the end the moral was that, within the framework of IoT, "protecting against physical attacks is perhaps not the most pressing issue". Arguably the most pressing issue is depicted by the following picture. 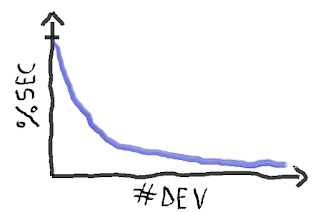 The graph is not based on real data, making it somewhat informal (and accordingly, it's been drawn with an informal graphic tool). The x-axis represents the number of IoT devices and the y-axis carries an extremely informal notion of "percentage of security". The story told is that the majority of devices come with almost no security, and a very small part delivers very strong security. A lot of effort has been put to target the left-most part of the graph: developing really secure protocols and algorithms to make the latter, perhaps already reasonably robust, better. What it should be done (more) in order to ship secure products in every house is pushing the overall "percentage of security" up in (almost) all devices. 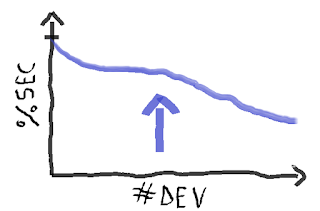